I usually share my poetry here, but thought this is the best space I have to share my other non-work creative activities. I promised a friend (hi, Meredith!) a copy of my music for my setting of GK Chesterton’s lovely Marian poem, “A Christmas Carol.” I wrote this in 1999, hoping it would be performed in 2000, which would have been the 100th anniversary of the poem. I was not able to find a group that would perform it, so it has languished in my mind since them, with me occasionally singing it to myself as I walk, as happens with most of the rest of the music I’ve written.

The back story on this piece is that my friend, Carol Shaw, was ill with cancer, as it turned out a cancer that would kill her but we didn’t know that yet. She was also struggling and unhappy in some other areas of her life and going through a period of strong personal challenge and growth. One of the projects she started was learning how to work with rocks and build with them, with the goal of building a grotto and shrine to the Virgin Mary. Carol was deeply engaged in Marian traditions and faith. In a conversation with her I mentioned the origins and meaning of her name, which came from Carl and was usually used to refer to the war leader or political leader of a tribe. She was horrified. She absolutely loathed this, and had always believed her name came from Christmas Carol. In a sense, this song was partly to support her in her challenges, and partly to make up for the gaffe of the name.

Carol and I were both sopranos in our local church choir. I wanted to do a piece for the choir to celebrate the Christmas connection with her name, and started looking for a song to to arrange. I wanted something with a Marian focus. I started looking and found there really are very very few carols that celebrate Mary’s role in the birth of Christ. I was very surprised. The few I found didn’t appeal to me to arrange, so I started looking for a Christmas-themed poem with a Marian flavor that would be out of copyright and appropriate to set. I hope you are as happy with what I found as I am.

The Christ-child lay on Mary’s lap,
His hair was like a light.
(O weary, weary were the world,
But here is all aright.)

The Christ-child lay on Mary’s breast
His hair was like a star.
(O stern and cunning are the kings,
But here the true hearts are.)

The Christ-child lay on Mary’s heart,
His hair was like a fire.
(O weary, weary is the world,
But here the world’s desire.)

The Christ-child stood on Mary’s knee,
His hair was like a crown,
And all the flowers looked up at Him,
And all the stars looked down. 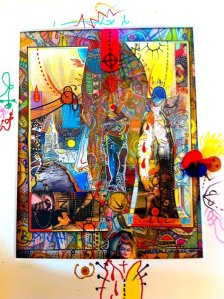 The instability of heat, deep;
the frantic humor of the clustered stars;
ribbons of dark silk cradling worry beads;
transparent roofs form from worn away tar.

Here is a hand, hooked, the heart inserted
Into the I Ching hollow of your hurt.

The Eyes of Men with no Mouths

the choice seems to be bombs.
Nobody sees the impact & lives
to tell the tale, except perhaps
the cleanup crew, but that is
a different kind of impact.

But what do I know about bombs?
No kind of military historian,
I know so little I’d think bombs new
if the Star Spangled Banner did not sing
of “bombs bursting in air”. That is how

I know this beautiful terrible lighting
up of the night sky is not new at all.
So that wasn’t the first war, but it was
the first war in which medicine
had caught up with the damage

that could be caused to the human body
& leave it still recognizable
as a person if not the same person.
With bombs, people mostly just die
or walk away. With land mines,

a leg here or there, probably there.
With guns, that was the first war
when men came home with no mouths.
Before, wounds to the head were
more like bombs now, but one on one —

you usually just died. In that first
& only war when war was still
personal & we finally knew
how to save people from, well,
if a bullet took a man’s jaw off,

Kazanjian could save him, & send him
home to his wife & loved ones,
without a voice, without a smile
or grimace, without lips to kiss,
but alive. At least, if he lost his face

only from the nose down. This was
the birth of modern military dentistry,
when Kazanjian took his passion
for restoration to the Brits when
the U.S. refused to fight. Now another

Kazanjian, perhaps his son, perhaps not,
speaks about faces of war, faces
of peace, & beauty in difference.
But what do I know about war? Am I
a pregnant woman begging at a hospital

for a Cesarean section so that
I will not go into labor under
the expected bombs? Am I the doctor
who delivered a baby in the desert,
without water or gloves, second

hand American fighters overhead,
a baby probably now old enough
to fight in the current conflict?
I know a man who said, among our
friends, there were those present

for whom he would give his life.
This man, to whom ‘love’ is
a four letter word, grieves
for the broken beauty of Baghdad,
that can be repaired by no military

dentist or plastic surgeon. Grief
is the wrong word for this intense
and complicated emotion, but what word
should be used must be in a language
I don’t know. So, I wrongly say he grieves

for off camera death & injuries;
I wrongly say I grieve for his grief
and mine that I witness this breakage
and not the beauty. I know a woman,
an Army Colonel, who went to Bosnia

and told us, her friends, the barest
outside rim of what she saw there. Moses
was sheltered from his own spoken wish
to see God’s atomic glory, given only
a glimpse of his flank while He passed.

She is a mother, balancing sheltered and shown.
Do we really want to see? To watch? I hear
the newscaster describe a mushroom cloud
over Baghdad, speculating cautiously
on what armament was used and where.

The photos of men with no mouths hide
in old journals with almost forgotten titles
on shelves where few know to look. Their eyes,
angry helpless hopeless eyes never asked
to live the life they were left, never asked

to be a forgotten photo, and no one
anywhere has told the story of their lives
after they came home. My friend, where
she is now I’m not sure. I know she had
misgivings about this conflict, but still

will go if sent, or perhaps has already gone,
but wherever she is she will do whatever
good she can. She always does. In between bombs,
we hear the call to prayer. All around
the watching world, televisions flicker

with a lit-up night sky, family rooms
rumble with the drum-beating of bombs
threaded through with a clear reedy call
to prayer. It is said that God takes nothing
away without giving something in return,

although what is given may not seem equal
to what was lost. Those men with no mouths
have the most eloquent eyes on earth,
& they are still speaking, if we ourselves
have eyes to see, ears to hear, mouths to speak.